I've been trying to read the pro-AGW case on websites
like realclimate and the Stoat. I'm trying to keep an open
mind, but much of what is presented doesn't agree with my
preconceptions that it was as warm or warmer in the past when
CO2 levels were lower. My other bias is that several degrees
warmer doesn't scare me, but if the ice starts to come back things
will be much worse. Going the low energy low emissions route would be
the worst thing we could do if it is actually getting colder, so I'm going
to try and give my anti-agw warming arguments to their pro-AGW
arguments.

the first link on the "is sea level rising" question takes you to the IPCC FAQ that says this:

Yes, there is strong evidence that global sea level gradually rose in the 20th century and is currently rising at an increased rate, after a period of little change between AD 0 and AD 1900. Sea level is projected to rise at an even greater rate in this century. The two major causes of global sea level rise are thermal expansion of the oceans (water expands as it warms) and the loss of land-based ice due to increased melting.

To say that no sea level rise occurred from 0 AD
to 1800 is a pretty big statement. There are
pretty good maps from after the renaissance, but
from 0 AD to 1500 there isn't too much, or at least
not enough to say it didn't happen.

One set of datapoints that exists are structures built near the sea
in classical times. The foundations of those buildings could be
close to sea level at the date they were constructed. if
they are close to a river then the foundations would be covered by mud as the
river builds out into the newly deeper sea, or if they aren't close to a river then
they'd be underwater assuming the sea rose.

A misconception that seems to be prevalent is that rising sea levels always means
less land available, that the sea will just encroach on us. Instead increases in sea level
either give rivers or delta fronts more space to fill, and land progrades out into the sea.
Or if there is no river nearby the newly higher sea lever transgresses over the land.
If sea level decreases, then rivers cut down as steeper hydraulic gradients give them
more energy. (a google search reveals several articles on archeogeology)

From a geological standpoint, ravenna has changed quite a bit over the centuries.
From classical times to the 19th century, the city was surrounded by rivers.
Along with the surrounding swamps the protecting rivers were a reason that
the emperors moved the capitol there. The adjoining city of Classe was the
port for the adriatic fleet and had access to the sea, now both ravenna and
classe are landlocked.

This indicates that the rivers running through Ravenna prograded outward into
the sea, and the height difference between the floors of the 6th century buildings
and current ground level is an indicator of sea level rise. 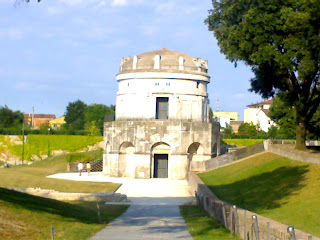 Theodoric's tomb is a stone
structure that is heavy enough
if it was going to subside it
would have disappeared by
now. It was built in 520 AD.

The difference in height between
it's current floor level and the
surrounding bluffs are around
3 meters. All the other classical
buildings in ravenna are 1-2 meters
below ground level I think that
this indicates sea level rise
is somewhere around 1 meter
per 1500 years , which is 60 mm per 100 years. That's an in the ballpark number
for the sealevel rise estimated by AGW (100mm/century).
Posted by Joe at 11:59 AM