Rabbits, coyotes and an import tax on oil 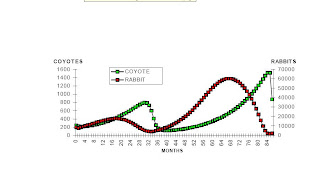 Having worked in the
oilfield since 1991, I tend
to be a pessimist about the
price of oil, meaning I worry
that it will go down. Since I
also drive a car and eat I worry
that it will keep going up as
well. It's a conundrum that
will likely be solved shortly
by the market, as previous oil price
spikes have been followed by
crashes for the past 150 years (see, The Prize, by Daniel Yergin).

One way to model the price of oil over time is as a differential equation, with
consumers chasing oil. The above chart models a similar system of coyotes
and rabbits. (the link goes to the University of toledo, thanks) As the rabbit
population grows, the coyote population grows, then
the rabbit population crashes, soon followed by the coyote population. The price
of oil has followed this dynamic for the past 30 years, as more consumers join the
market, the price goes up, then the economy cools and the oil industry crashes into
dust. The points on the chart with high rabbit population are equivalent to when the living
for the consumer is easy, the price of oil is low and oil companies and service companies
are laying off engineers by the dozens. When the rabbit population is low are the oil industries
fat times, it is easy to change jobs, day rates are soaring and things are booming, baby!

[before 30 years ago the shut-in production of the texas oilfields helped to damp out
a lot of the wild spikes, now there is very little shut in production even in SA. To increase
production we have to drill. ]

These cycles will continue until the LAST CYCLE, where we'll pass peak production and consumption will always be higher than production with ever increasing prices. I don't think we're at the last cycle yet, it is reasonably likely that the slowing economy will decrease demand, decreasing demand not just for oil but for crap from China, which will double whammy the price of oil back down to the $40 dollar range. By this time next year we'll see people with H3's filling up for $30 again.

Suggested Solution:
I'd like to suggest some coyote control right now. There should be an import tax for the US
to artificially support the price of oil at around $80, low enough that it might never have any
effect whatsoever, high enough that if there is a crash than all the expensive projects in the
deepwater GOM, oil shale, etc can have a high enough guaranteed price to continue. We'll
protect some US industry, as well as the new alternative energy industry, and keep the US
on the path to improve it's energy future, not let it backslide back to cheap oil.
Posted by Joe at 5:58 AM

Email ThisBlogThis!Share to TwitterShare to FacebookShare to Pinterest
Labels: oilfield